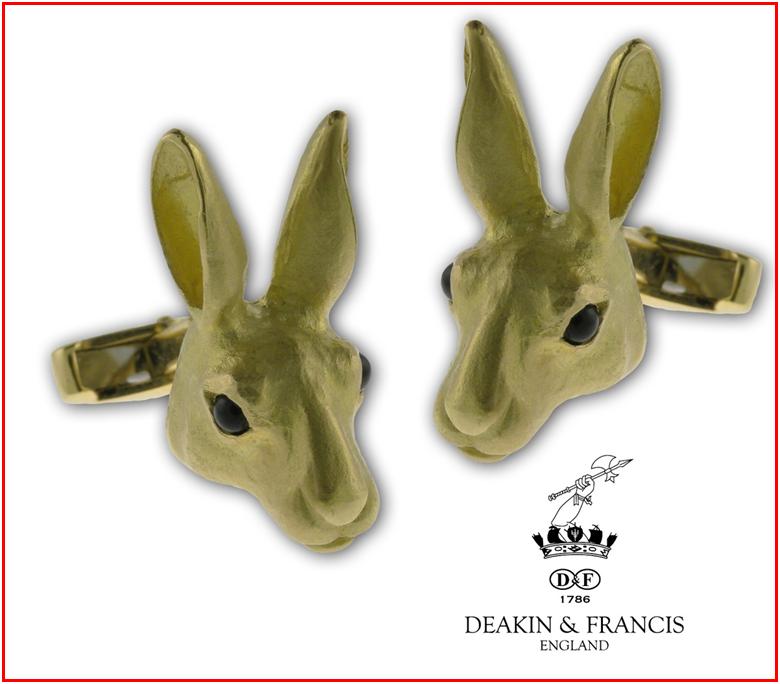 The Chinese Horoscope sees a new year on 3 February 2011. The Lunar New Year dates from 2600 BC, when the Emperor Huang Ti introduced the first cycle of the Chinese zodiac. It was about this time that the Chinese, along with the Egyptians, Byzantine and Japanese Dynasties created the process of Vitreous Enamelling, also known as ‘Hard Enamel’ that our cufflink workshops still use today.

But back to rabbits, or rather the year of the Rabbit. The Twelve Animal Signs in the Chinese Lunar Calendar rotate each year. The coming 2011 year of the Rabbit, starting on February 3rd,  is said to be interesting (that’s also a Chinese curse) and in theory it will be a balanced and tranquil year.

We shan’t mention the song sung by Flanagan and Allen but in case you need a reminder, here’s the refrain – oh and did I mention that this is the year when rabbits are protected? Don’t peek at the guns….

Don’t give the farmer his fun! Fun! Fun!

Without his rabbit pie

Here at Deakin & Francis we like rabbits. They are said to have a good eye for art, design and fashion, and are usually at the top of anyone’s Best Dressed list. Mistakenly identified as timid, we feel they are rather more accurately described as wise and cautious.

A warm welcome to 2011 and rabbits everywhere.