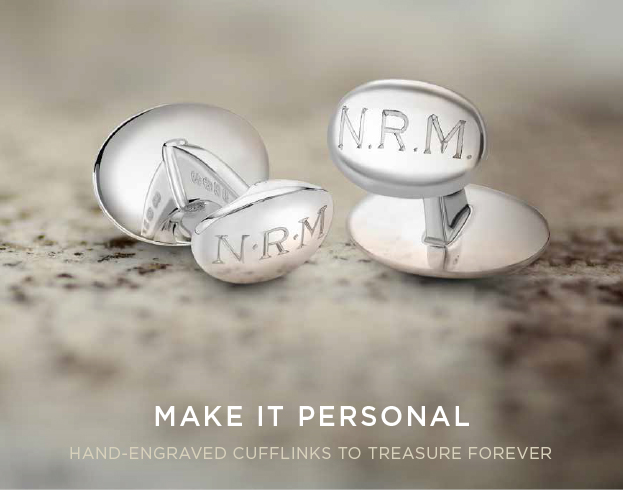 Today a piece of engraved jewellery or a piece of decorative home ware is a thoughtful gift, a reminder of a memorable event and engraving is a common practice amongst jewellers in the UK and across the world.

The skills required for this intricate craft have been passed down throughout the ages and there are associations dedicated to preserving the specialist tradition of hand engraving.
The practice of engraving has been around for hundreds of thousands of years and some of the earliest examples can be found in etchings upon cave walls and rocks showing our ancestors as they hunt for food. In Greece and Egypt, cameos (carvings into gemstones) have been found depicting ancient leaders, dating back to the time of Christ,

The engraving of signet rings was also very popular and has become a lasting tradition amongst jewellers. It was common for the wearer of the signet to have their family crest engraved in reverse on the front of the ring, known as seal engraving. This meant that when the ring was pressed into the wax seal of an envelope it would show the crest, thus confirming the sender’s identity. Seal engraving today serves to provide a link between modern generations and their family ancestry with signet rings still being a firm favourite of men’s jewellery.

We have marked or our added personal brand to our prized possessions, since time immemorial. Partly to advise our neighbours which items were in our tenure and also to demonstrate the ownership of a personalised piece.

Seal rings, or signet rings, have been used as signs of authenticity that dates back to 3500 BC. Signet ring engraving takes two forms, hand carved or laser-cut. Deakin & Francis’s in-house engraver specialises in the fine art of hand-carving, using a range of flat and lozenge gravers, as well as shaders and beaders to achieve the perfect final design. The hard carving is a unique tradition amongst jewellers.

It is common for the wearer of a signet ring to have their family crest engraved in reverse style on the front of the ring, which is known as seal engraving. Previously used for pressing the ring into the wax seal which would adorn an envelope, and thus the crest confirmed the sender’s identity. Seal engraving today is used to provide a link between modern generations and their ancestry with signet rings being a firm family jewellery favourite.