Home > News > A history of derring-do 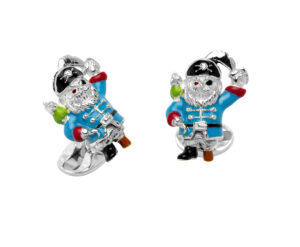 Deakin & Francis was established in 1786 and has operated successfully in its historic building in Birmingham’s famous Jewellery Quarter ever since. To achieve such longevity required, we like to believe, not only business acumen but also a dash of alacrity and courage inherited perhaps from our more swashbuckling forefathers.

We are all certainly somewhat in awe of ‘Arthur’ a distant 16th century ‘Dakyn’ (as our name was spelt at that time) who was so well-recognised for his derring-do as a naval officer that he was rewarded with the granting of the Deakin family crest for his heroic antics at sea. The crest, which we have long used as the Deakin & Francis company logo, depicts a raised and armoured arm rising from a crown, the hand clutching a hatchet.  It is accompanied by the somewhat impenetrable motto: “Strike, Dakyn, strike, the devil’s in the hempe.”

Family folklore has it that this ancient, sea-faring Deakin was second in command on a warship captained by a prominent British aristocrat closely related to the royal family.  The ship came under attack from pirates who drew alongside and bound the two boats together with thick hemp ropes, thus enabling the enemy ‘devils’ to swarm, muskets primed and cutlasses flashing between their teeth, over the ropes connecting the two craft.

In the ferocious fighting that followed, Deakin, egged on by his sailors, braved the attack and saved the day using his trusty hatchet to ‘strike’ and sever the hemp that bound the enemy craft alongside his own.  The ship was thus released and the crew and more importantly the grateful aristocrat, who subsequently granted to Deakin the use of a crest combining the hatchet and the royal crown, were saved.

The crest remains a much-cherished symbol of our family and our business, but the pirates who presumably plunged from the severed hemp and perished in the brink, have never been forgotten either and are immortalised in our world-famous pirate design cufflinks which are as much a part of Deakin & Francis history as our illustrious hatchet-bearing ancestor.