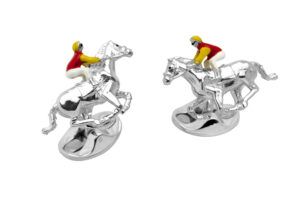 I often wonder at the bravery (or perhaps idiocy) of the chaps who invented horse racing. Imagine seeing these gigantic beasts for the first time and thinking, “That looks like it could run fast whilst I sit atop it..”

Is it said that horse racing has its roots in the history of central Asia around 4500 BC, with the nomadic tribesmen living there being the first to domesticate the animals. There are also records of horseracing dating back to the Roman Empire and also throughout the 12th century.

Horse racing didn’t become popular in England however, until the 17th century. King James I was the first king to make it a royal sport, a notion that was upheld by King Charles and Charles II. Horseracing later became the first regulated sport in Britain during the 18th century with the creation of the Jockey Club. I can just image my forebears attending races and placing bets just as I will be when the Glorious Goodwood festival rolls around in a few days’ time.

The Goodwood festival this year looks set to be another brilliant celebration of horseracing and I will be wearing a perfect pair of racing horse and jockey cufflinks to set the tone.